** I have been a bad blogger lately.  I had intended to blog often while on hospital bed rest, but writing on the iPAD without a real keyboard was frustrating.  Then the boys arrived and…well…I have been a bit busy.  So, almost 5 months later, I thought it is about time to share the boy’s birth story. 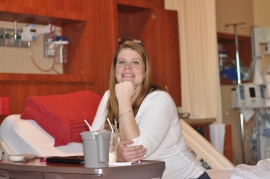 Chris and I had celebrated both Christmas and New Years from my hospital room and a few fairly uneventful weeks had past.  I had reached the 28 week mark.  This milestone I felt to be a rather large accomplishment (major developmental issues decease at 28 weeks) and I wanted it celebrated.  Chris had picked up some tulips (my favorite flower) and a cookie cake.  The cake read Happy 28 weeks!  Of course, Chris had to explain what happy 28 weeks meant to the cake decorator; apparently it was a first for her.

An ultrasound tech I didn’t know showed up to do my daily scan a few days later.  Up to this point, I had seen the same handful of techs every day.  I had become really good at looking at the scan and knowing what I was seeing.  I could tell if the diastolic blood flow was normal, intermittently absent, or completely absent.  I didn’t notice anything out of the ordinary on the scan.  Later that day, I was told the scan showed some intermittent reversal, (see Absent End Diastolic Blood Flow for an explanation) and that I would be NPO after midnight.  NPO basically means no food or drink.  They would come the following morning and rescan me and see what the scan shows.  If it is better, I will stay pregnant; if it is worse they will likely deliver me.  My favorite ultrasound tech came the next morning to do my scan.  She looked over the scan from the day before showing me what they saw as reversal.  She questioned the reversal and said it very easily could have been that I was lying on the cord and in the future to roll towards my side a bit and see if it changes the scan.  It also could have been archiving, a term I eventually heard often, but am still not clear on.  Her scan showed intermittent absence.  About 30 minutes later my doctor called to tell me to eat breakfast, they would not be delivering me that day, she also expressed some question to the validity of the earlier scan.

About a week later, I had another scan that showed reversal, only this time it showed more reversal.  I knew it when I saw it on the monitor.  The tech said she would have to have the doctor interpret the scan to say for sure.  In other words, yes, that is reversal.  This time I was nervous, I thought for sure I would be having the babies.  Finally the specialist came by and told me I would be NPO and they would be checking the scan again in the morning.  Much like last time, the morning scan was good.

The next time I had a scan that showed reversal was the morning of my baby shower.  We knew it was only a matter of time before the babies made their arrival and my wonderful girlfriends felt everyone should get to have a baby shower.  They pulled the whole shower together in less than 5 days. All the doctors, nurses, and techs new my shower was happening that day.  The nurses spent part of the prior day clearing out the perinatal testing room and getting it set up with tables and chairs.  It isn’t often that a baby shower takes place in the labor and delivery unit. After my bad scan, I was worried I might be having my babies that day rather than the baby shower.  After all, this scan was the worst one yet.  My doctor was out of town, so the other doctor from her practice stopped by to check on me.  As soon as she got in the nurses advised her of the bad scan.  She told me, she was going to call my doctor and the specialists so we could plan the day accordingly.  First she spoke to my doctor; since she was traveling and wouldn’t be back in town until that evening; even if they did decide to deliver I could still have my shower.  This got me wondering how often baby showers and birthdays fall on the same day?   Then she spoke to the specialist who said we would follow the same protocol as before, NPO after midnight rescan in the morning.

My doctor was there for the scan the next morning, once again it was good.  I would not be delivering that day.  She and I discussed the frequency of the reversal and my other labs.  For some time we had been debating what would be the thing that would cause delivery. I was inching towards HELLP again or at a minimum Preeclampsia.  My platelets had been steadily declining for weeks and I was getting closer and closer to the 100 line.  When I first got to the hospital my platelets were 235, now they were 129.  I also had higher levels of proteinuria, but so far my blood pressure was steady and liver enzymes were good.  Of course, I had the blood flow issues, so the reversal could potentially cause delivery.  Or, due to the blood flow issues, Baby B (aka Nolan) might stop growing in which case they would deliver me.

Mid week, I had another bad scan followed by a good scan the next day.  This was becoming very routine.

The very next day, I had another bad scan.  The frequency of bad scans was increasing. They again had me NPO and rechecked me Friday morning. That morning I asked them about possibly doing a growth scan.  I wasn’t scheduled for one for another 5 days, but with all the reversal I felt it might be good to move it up.  The tech wouldn’t do the full growth scan early, but did one quick measurement.  She said they don’t seem far off, but Baby B does seem smaller.  Other than that the scan was fine.  Everything seemed normal except my ankles had begun to swell.  Noting major, nothing more than one would expect at almost 31 week; seemingly minor. Yet, I have learned things aren’t always as they seem.  One of the specialists stopped by and advised I would not be delivering that day, but he wanted the nurses to keep a close eye on my blood pressure over the course of the day.  As he was leaving my doctor was walking in the room.  They spoke for a minute and then she came in and told me basically the same thing.  She said don’t be surprised if I have the babies very soon, maybe groundhog day (Saturday), maybe super bowl Sunday.

After my doctor left, I ordered breakfast and logged into my laptop.  My hospital bed had also been my office for the last 7+ weeks.  No point in using up my maternity leave before the babies arrived.   It was a busy Friday, plus thinking the babies might be coming soon, I was trying to wrap up loose ends.  The phone in my hospital room rang. It typically rang at 1:00 pm if I hadn’t called in my lunch order or at 5:30, if I hadn’t called in my dinner order.  Who eats dinner at 5:30?  But it was just after 2:30 and I had already had lunch. My room phone ringing for anything other than meals was not common.  I answered and my doctor was on the line. She said change of plans; you are having the babies today.   This was not at all what I expected when I answered the phone.  Still shocked at this news, I mustered out an okay.  She explained they reviewed everything beginning with the frequency of the reversal, not to mention when they were seeing it, they were seeing more reversal and it was becoming less and less intermittent, my labs were not good, and there is concern Baby B isn’t growing much if at all.  It was becoming the perfect storm.  All the reasons we had speculated they might deliver me, were happening at once. While this was not yet an emergency situation, they were not sure I would make it through the weekend without it becoming an emergency delivery.  Also, she had checked the schedule and was not comfortable with the amount of staff on for the weekend.  With it being super bowl weekend, should anyone call out, it could leave them short staffed and create a dicey situation.   I needed 2 full teams since I was having twins and she realized the “A team” was there that day.  She checked with anesthesia and they had an opening at 3:30.  As she is telling me this, I glance at the clock and realize that is less than an hour away.  She said she would have preferred to spring that news on me in person, but with the short timeline she figured she would call me as she drove to the hospital.

I got off the phone with her and called Chris.  Luckily he answered… (to be continued)

1 thought on “The Boys Birth Story (Part One)”